You have been doing agile for a few years now. With a regular cadence you have retrospectives and a lot of problems and great improvement opportunities are raised but nothing seems to really improve. Stop doing retrospectives!

Here is a short promotion video of my session

Recently I ran a Toyota Kata style retrospective meeting at a new client. In this post I will share how I set it up and how it went.

This is a team of approximately 15 people including Business analysts, Developers, Testers and Managers. They develop custom software for their organization.

This team has been using Kanban for some time now and have used the Agile retrospectives format as the main process improvement initiative with mixed results. I suggested a more focused approach. We decided to try a Toyota Kata style retrospective meeting.

The meeting time of 2 hours was on the short side as this was the first meeting and Toyota Kata was new to the team.

I stated off running through an extended version of Agile LEGO – Toyota Kata an alternative to Retrospectives and the Lean LEGO – The red brick cancer presentations to give the team a basic understanding of the Toyota Kata approach and the importance of flow efficiency.

After the into I ran the ESVP exercise from Agile retrospectives.

In this exercise each team member anonymously reports his or her attitude toward the meeting as an Explorer, Shopper, Vacationer, or Prisoner (see sidebar).

I asked everyone to write down the letter E,S,V or P on a post-it and fold it and the give them to me (using a post-it was a bad idea as they stuck together and was hard to open).

I then made a simple histogram of the collected answers. And then destroyed the post-it to ensure anonymity.

We had a very short reflection on the results.

I then announced it was time for a coffee break and that anyone that did not want to stay for the second half of the meeting was free not to come back after the break.

The intension was to only have the team members interested in the improvement work back after the coffee break.

After the coffee break we started up with the Vision/Challenge part of the Improvement Kata. 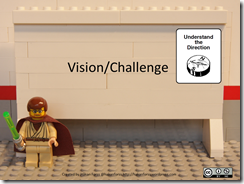 As we had few Prisoners and Vacationers in the group we were surprised that everyone showed up after the coffee break. However we had a few drop offs due to double booked meetings later in to the meeting.

To get us started the team manager and I had set up a first challenge for the team. We had not put a lot of effort into formulating this challenge and it is definitely not a vision. But the important part is to get going and running through the Kata’s. Don’t get stuck in analysis paralysis.

Toyota Kata is about the habit of doing it!

We set the challenge to be a reduction in lead times by 50%. And this should be done in 6 months.

We had some discussions about the challenge such as:

Great discussions! We defined the start and stop boundaries for what we would measure and improve in this challenge. We discussed the easies way to track this information. We decided to track start and end date information on the physical kanban cards on the board.

Now that we had set the challenge it was time to study the current condition. 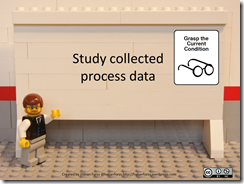 The Application Lifecycle Management system they use currently track some limited process data and we took a few minutes and went through the data. We saw that there was not a clear correlation between the amount of time for developing a story and the lead time for the story. Many small stories had longer lead times than the medium and large sized stories. Why?

As we had very little data I did not spend to much time on this. I wanted them to get started. We moved on to the Target Condition.

The team manager and I had set up a first Target Condition for the team as with the challenge.

We set the Target Condition to be a reduction in lead times by 25%. And this should be done in 2 months.

There was some strong objections to this Target Condition. A few felt the wanted a Target Condition that felt more easy to achieve. How could we do half the challenge in just one third of the time?

But most of the team felt that they wanted to take on the challenge. They thought the first 25% was going to be easier than the last one.

What is the next step?

We moved into identifying obstacles that are preventing the team from reaching the Target Condition. 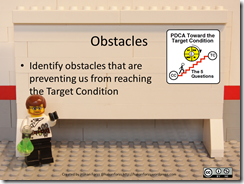 After some discussions the team concluded that the amount of data we had to analyze was not sufficient. More data was needed. 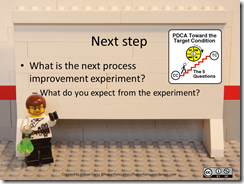 The team decided that the next step would be to collect some more process data. 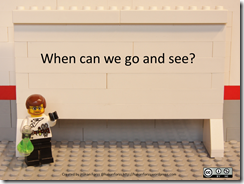 I stressed that we don’t want to get stuck in analysis. I wanted to know when we could go and see the newly collected process data and see what we have learned. We decided to have a new meeting in two weeks.

And then we concluded the meeting with a short meeting retrospective. The team had some mixed feeling about switching to a new style of improvement work. They felt the Toyota Kata style felt more focused. We lacked process data to really analyze. They wanted to get going faster the next time, shorter presentations.

The team gave a Return On Invested Time (ROI-T) of ~3,8 (1=Time totally wasted, 5=could not spent the time better)

More than two hours is needed to get started. I would probably use 4 hours next time.

Next time more process data should be available at the startup meeting.

The general format held up well except the lack of process data.

People was much more engaged than what I use to see at retrospectives. Not sure if this was due to the new format or that it just was something new.

For more posts with LEGO see the LEGO tag.