Version 3 of the getKanban board game has finally arrived. It is now over a year ago since I saw a prototype of version 3 at Lean Software & Systems Conference 2011 and I have been waiting for it’s arrival ever since.

Guess the excitement when the delivery truck pull up this week!

We immediately had to unpack the package and see how the final version looked like.

The game comes in a practical and nice looking bag.

When you open the bag you will find:

So lets set it up!

This is the recommended setup as described in the new and much improved facilitators guide. The new facilitators guide is now delivered as two separate slide decks. One  for the Quick Play mode, and on for the  Standard and Advanced mode.

When you setup the game you will find that the overall quality of the game is much higher compared to version 2. The game board has a plastic surface that you can write on and then clean. This is a great as the version 2 game board starts to look quite messy after a few games. 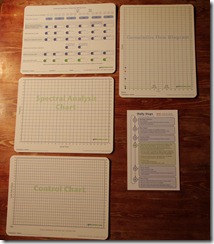 There are so many improvements to the game and the gameplay. I will only point to a few of them here. I will leave it up to you to discover the rest when you get your own copy or you have me or one of my colleagues from Avega Group over for some gameplay

The most visible change in version 3 is the custom dies. The new dies have three numbers in different colors on every side. The different colors represents the different specialties. Red for the analysts, blue for the developers and green for the testers. When you play a die in a column you use the number with the corresponding color. If you play the die according to its specialty you will get higher numbers. The dies no longer span between 1 and 6. The large numbers are between 3 and 6 and the smaller are between 0-3. This will reduce the variability and luck will have a smaller impact on the game outcome.

One other big difference is the introduction of replenishment and deployment cadence. In version 3 you can only replenish your input queue and deploy your stories at the end of the three day billing cycle. I think this is great as this mimics reality better. And just as in reality these process policies can be changes in the game.

The forth change I want to point out is the ability to change the work-in-process limits. As this is a core part of Kanban it is great that it is now part of the game. I have for some time allowed this when playing the version 2 as described in a previous post.

I have played the prototype version once. I have also facilitated a preproduction version as part of the Accredited Kanban training we ran at Avega Group earlier this year.

Version 3 of the getKanban game is a big step forward compared to the previous versions. Much more learning opportunities and also more opportunities to improve on the process, which is the main point of the Kanban Method.

I highly recommend the new and improved version 3 of the getKanban game.

Thank you Russell Healy for a great game!

I also want to say thank you to Russell Healy at getKanban Limited and Daniel Vacanti at Corporate Kanban for the copies of the game I have received.

The last five or six times that I have facilitated the getKanban game (version 2) I have played with some modified rules.

When attending the inaugural charter member meeting of the Lean-Kanban University Accredited Kanban Training program in Soestduinen, Netherlands we discussed a suggestion from a class attendee that I really liked.

The suggestions was that work should be done on all stories in the doing column instead of focusing the work on a single story at a time. I really liked this as it better represents how work is really done in the real world. It better simulates the multitasking done in most processes.

So how do the new rule apply in the game?

Below is three standard stories in the testing column as we are about to start playing day 9. I have taken stricken out six testing points on story S1 so the facilitators guide will more or less still work for day nine.

We role a four on the orange die for test and we shall strike eight points off the stories. So we start striking off one on S1, then one on S2 and then on S3. We have five more points to strike off so we start over on S1 then S2 and S3. We keep doing this until we run out of work to distribute. We pull work just as before up to work-in-process limits.

As a very positive side effect I have found that players will discuss the value of focusing your work and lowering the work-in-process much more.

The Kanban method is all about evolutionary improve your process. But version 2 of the getKanban game had very few real process improvement points. So I have introduced the option to change the work-in-process(WIP) limits once every game day at the daily stand-up meeting. I give the teams full freedom to lower and raise the WIP limits as long as they pull up to the limits and clear out stories over the limit asap.

I usually coach the teams not to make any big changes as this very easily can totally destabilize the process. Make small evolutionary changes.

I have found that allowing the teams to adjust the WIP limits and questioning the reasons for why they made the change is a great learning opportunity.

For the last two games I have facilitated I have made changes to how you play the intangibles and fixed delivery stories.

Now I let the teams decide how much work they want to spend on intangibles and fixed delivery stories when they are in doing columns. Combining this with the Multi tasking rule a situation could look something like this:

I have found that allowing the teams to use this rule makes it much easier to teach the value of keeping some options active in the system. It is also easier to explain different class of service.

I have had the opportunity to play the pre-production version of version 3 of the getKanban game and it looks like some of the rule changes describe here will make it into the version 3 game.

Let’s go out and play getKanban!

As part of my Lean/Agile Coaching work I do quite a bit of Kanban training. One of the tools I try to use as part of that training is the getKanban Board Game.

The goal of the getKanban game is to maximize the net profit by attracting subscribing customer for your software. You attract new customers by making new features available for the customer. Every third day of the game you will charge your existing and new customer. The team with the highest net profit at the end of the game day 21 will be the winning team.

To maximize your profit you need to manage your software development process by managing what work should be do by who and when. Work in the game comes in four different categories of story (or four classes of service):

To help you manage the process you will learn how to create and use a Cumulative Flow Diagram and a Control Chart.

During the game different event will occur that the team has to handle by making prioritizations and resource allocation decisions.

This game is a great way to learn many of the mechanics of a kanban powered process.

It has been described as the most effective way to teach Kanban.

I do agree that this is truly a great tool to learn the basics of how a kanban powered process can be managed. The game has many learning opportunities and serves as great reference for further discussions and training. I highly recommend this game.

If you want to play it in your company please don’t hesitate to contact me.

Here are some example charts, results and pictures from my classes 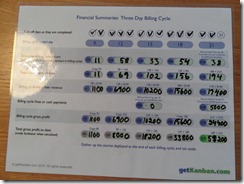 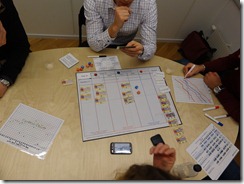 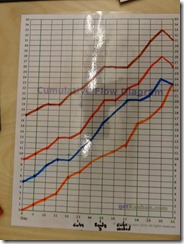 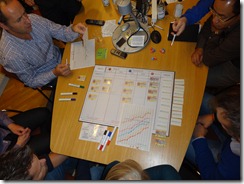 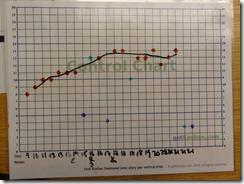 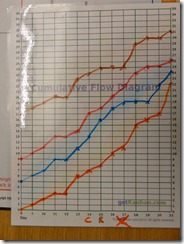 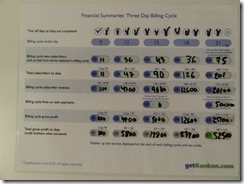 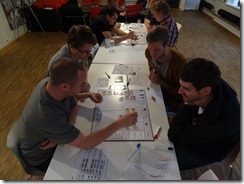 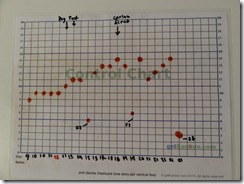 The last day of the Conference on Lean Enterprise Software and Systems 2011 (LESS2011) was Tutorials & Workshops day. I was asked by the conference organizers to arrange a game day where we would play two games: the MIT Beer Game and the getKanban Board Game.

The game MIT Beer Game is a simulation game of system dynamics. It was introduced in the 60′s by MIT’s Sloan School of Management and further popularized by John Sterman and Peter Senge. The goal of the game is to optimize a supply chain in several stages to meet customer demand while minimizing logistics and warehousing costs.

This game session was led by Rolf Häsänen from EPL Business Institute and I was assisting.

We had two teams playing: KOFF and Karhu. Both teams played well with high spirit and lots of fun. Team Karhu won with a cost of approximately $1700 and team KOFF was around $3300

Here are some of my pictures 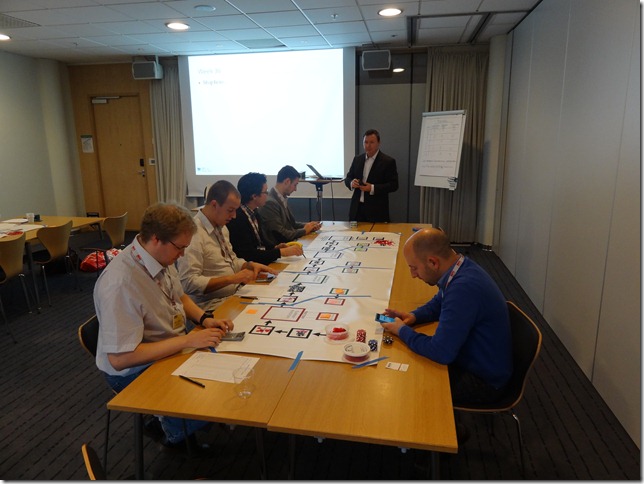 The getKanban Board Game is a physical board game designed to teach the concepts and mechanics of Kanban for software development in a class or workshop setting. It has been described as the most effective way to teach Kanban. It’s hands-on, engaging, and fun. The getKanban Board Game is frequently used in Kanban training classes around the world.

This game session was led by me.

We had one game running. It was a very engaged team that played with high energy and intense discussions. People were suppose to leave early but we stayed on for most of the afternoon. The sessions was so intense so I didn’t remember to take any pictures of the team playing but here is the result and the charts.

Thank you to all who attended and made this a great final day of LESS2011.

Thank you Rolf Häsänen for running the MIT Beer Game on your own time. Thank you Avega Group and Mattias Skarin and Crisp for the getKanban Board Games.

I will run a workshop at DevSum 11 where we will play this game. If you are interested please sign up here

I just love the unboxing video’s and blog posts of cameras and mobile phones so I couldn’t resist doing my own unboxing of the getKanban game. So here we go.

After some weeks of anticipation the getKanban game finally arrived. But I was not home when Posten tried to drop it off

So today when I came home and the pick up notification was in my mail box I dropt everything and drove to Posten and picket up my package.

This is how the box looks like when I picked it up.

After some help from my son we cut the package open and we almost cut off the strap!

I pulled the strap and out came this great looking bag!

I carefully opened the bags zipper and out came this content: 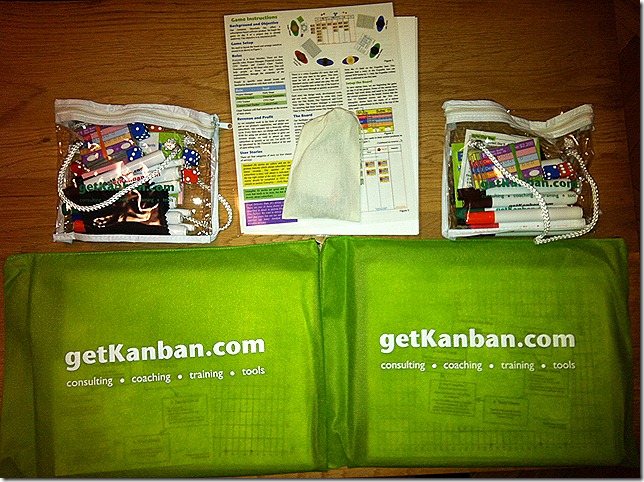 I opened one of the transparent bags. 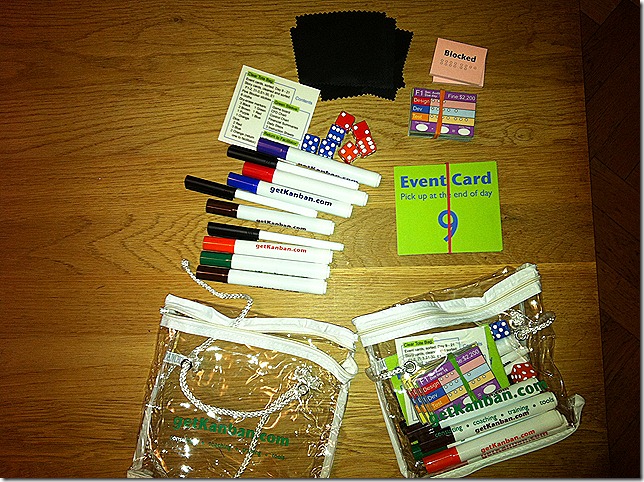 I then opened one of the Game board bags. This is the content:

I really looking forward to trying this game out with the family this coming weekend!

On a final serious note.

Do you want to really understand Kanban for software development? The getKanban Board Game is the quickest, most effective way to teach the principles and mechanics of Kanban. Leave a comment or contact me on twitter for some Kanban training, consulting or just to play the game.